Tesla offers a premium (“Ultra High Fidelity Sound”) and a standard sound system and they both have a lot of functionality. In this post I wanted to cover the USB music functionality and give my impressions on it.

Use the port closest to the passenger for USB music 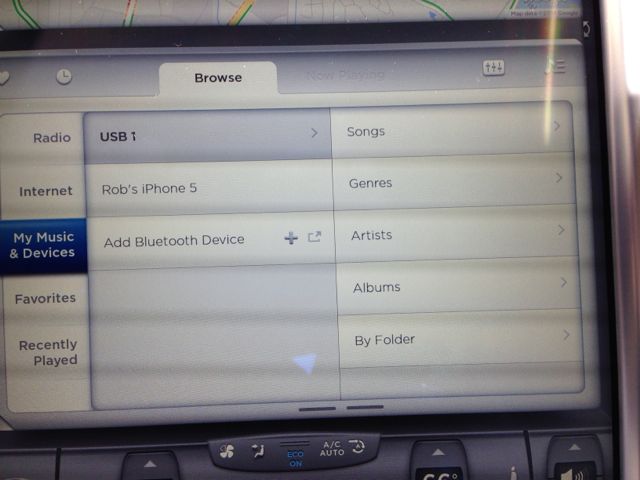 In general, like much of the Model S interface, the USB interface is beautiful and well designed. You can swipe between levels of organization (i.e. Genre->Country->Artist), there is album art on a lot of the music, the buttons and controls are very clean and obvious, etc. The sound coming from USB music on the standard sound system also sounds great to my untrained ears. There are some special touches like a high speed scroll option that helps you move through long lists quickly — there are a lot of obvious influences from Apple in the design.

For organization the sound system indexes your USB device (I was using a SanDisk Cruzer Fit 64GB) and puts your music into categories. This indexing is done very quickly compared to other car music systems i’ve had experience with. The categories are:

This gives you a number of options to find your music quickly, and while there’s no search function, you can generally find things quickly with these categories. With the fast scrolling feature (drag your finger along the far right of a scrolling list until you get near the first letter) you can find things even faster. You can also favorite songs that you want to play over and over and they’ll appear in your favorites list. It automatically retains a history of recently played songs so you can also go back to songs through that option (the clock like option near the top left).

Tesla supports a broad range of music formats with MP3, MP4 and AAC (without DRM) documented, and they also seem to support other formats like FLAC, AIFF, WAV, WMA and lossless WMA. I only tested MP3 files.

Album art appears when possible and is a really nice touch to go with the music and I enjoy seeing the images to go along with the albums as i’m playing music.

There are a lot of really nice touches in the interface for sure and someone or some team put a good amount of time into it and in many ways it is better than any other USB interface i’ve seen in a car.

In many ways it is better than any other USB music interface i’ve seen in a car.

Ok, so i’m an owner, not a fan-boy nor an employee. I’m going to start with a bold statement and then explain my position:

What? I just got done saying its better than other interfaces out there. How can it also be useless? The issue is one primary problem that appears to exist within the Tesla interfaces:

That’s my summary. The people designing the product and making functionality don’t use it daily in their lives. That means there’s a whole bunch of stuff they don’t think about or notice and it goes unnoticed/unfixed for a long time. The Model S has been out for almost 2 years and, while i’m sure there’s a priority list of things to do, these are college-intern items that need to be adjusted.

Let’s start with the big one: You can’t shuffle. Thats it, no shuffling, no random play order of songs, albums, folders, anything. Apple believes so much in shuffling they made a product that only did that. This above all other items makes the USB music feature useless in the real world. 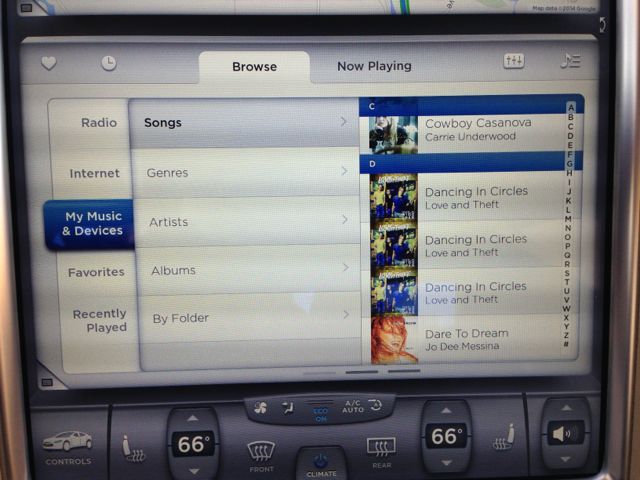 While you can say that a large list of songs playing alphabetically is “like” shuffling (pundits on the forums claim this), or you can hop to a position with some quick scrolling action in the list then play alphabetically, or try to number or name your thousands of songs in some manner to appear random, there’s just no way around this problem. In the Python programming language picking a random thing from a list is a single line of code.

Why doesn’t the alphabetical approach approximate a random play approach? First, alphabetical is not random. Second, it can be more annoying depending on how you loaded your music. I put things in folders according to playlists from iTunes. I have a “5 star country” play list, a “Best Country” (4+ stars), a “New Country” play list, a “Josh Turner” play list, you get the picture (stay focussed, don’t worry about the music selection!). What happens then is you end up with the same song in a several playlists. Now if you go to the organization of “Songs” what ends up happening is you get the same song repeated multiple times for every place it appears on the USB drive. So now when you play the songs you end up hearing the same song over and over. You can spend time, write code (I did), etc to remove duplicate music, etc, but you can’t make up for a missing shuffle function. If you go to an album, you can play the album, but, you guessed it, only alphabetically.

Fix: Add a shuffle function. Shuffle songs, shuffle albums, shuffle artists, shuffle within playlists, shuffle between devices. My 2007 Acura could do all this with 6 MP3 DVDs and it did it well.

The folder function was clearly an afterthought and it’s creation wasn’t taken seriously. For example, in all areas except the folder area you get album art on the music. But when you find the same music through the folder section it shows no album art. The song in the picture here is “Cowboy Casanova” and in the picture above you can see there is art, but here there is no art because I navigated here through the folder. Folders are playlists. They’re my grouping of my music how I want it.

The folder function was clearly an afterthought

Another example is the fast scroll option that you get in all the other organization areas to quickly scroll through songs etc doesn’t exist in this folder area.

Fix: Bring the folder functionality to the same level as the rest of the interface. Add album art and fast scrolling. Treat it seriously as it makes more sense than the other methods of organization since it is the user’s preference.

There are some other oddities in the interface. They have 2 USB ports to play music through. When you insert a device, rather than show the device name which they clearly can do since they can show my phone’s name with plenty of room, they show “USB 1”. If you insert a second one it’s helpfully called “USB 2.” Ok, so they left out the name, thats annoying, but no big deal. The odd thing here is that they’re named in the order you insert them. In other words, sometimes “USB 1” can be the port next to the driver and sometimes it can be the port next to the passenger. Thats just silly.

Fix: Show the actual USB device names and use ellipses if necessary to truncate.

I have favorite artists, albums, playlists (folders), genres etc. Why can’t I favorite anything but a song? I want to go back and (randomly!) play my favorite playlist over and over. If you think about it, favoriting only songs doesn’t scale. I have thousands of songs and even several dozen will make the favorite list difficult. But if I could favorite an artist or folder that would reduce the counts and be more manageable.

USB devices are designed to be inserted and removed whenever you want. Start playing USB music on the Model S and then yank the USB stick. It will keep playing for a bit then just stop. It will then find the next song name (it seems to remember part of the song list) and then try to play that then fails without any indication ever that the device is no longer around.

Fix: USB has a well known approach for USB insert/eject events, use it.

The Model S USB music interface was designed by good people that don’t use the product. It is great looking but not really usable. On my old (2007 era) car I played MP3s all the time from my playlists and never listened to the radio or had to use my iPhone to play music. In the Model S, when I listen to music I use Slacker. That has its own flaws that i’ll cover sometime. Meanwhile i’d recommend skipping USB music on the Model S until they get serious about it.

I’d recommend skipping USB music on the Model S until Tesla gets serious about it.

14 thoughts on “Playing music from USB in the Model S”